And on it goes. Like the title indicates I went to Greenwich, The Tate Gallery but I also went to a TV show taping. Here’s a nice pictures from Tower Bridge to get you warmed up: 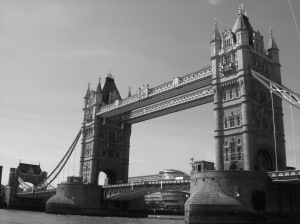 Day 3 was a special day, though to some this may be quite dreary since all I did was go to the ITV studios building. It’s located near Waterloo Station and there I waited all day so I could get a glimpse of none other than Rob Pattinson at the Graham Norton Show. The lovely Sarah told me about it on Friday and got me tickets. I did have normal tickets which meant I had to be there all day just to be able to get in, but it was well worth it.

My main goal was to see Rob Pattinson in the flesh. Which I did, be it from far away and I have no pictures to prove it, but the show was broadcast on BBC last night. The day before the show I checked the Graham Norton Show website and found out Hugh Laurie would be on the show as well. I wrecked my brain trying to find out why he would be on and figured out it must be to promote his new album. Turned out it was true: he performed live not once, but twice! So, not only did I get to see Rob Pattinson, but ALSO the amazing Hugh Laurie AND heard him sing live. To top it all off the show was hilarious. It was like a 2 hour comedy show and very entertaining.

For Day 4 we had planned on going to Greenwich. Unfortunately, we had to delay that trip by a few hours since my phone had decided to break down and we spent most of the morning in a phone shop off Tottenham Court Road. After a short boat ride we arrived in sunny Greenwich, had lunch and each went our own ways. My friend went to the Maritime museum, I went up to the Observatory & the Meridian and went into town. I found a nice second hand record store, bought some CDs and did some make up shopping at Superdrug. We met up at 5 PM and walked via the Greenwich foot tunnel and the Thames Path around the Docklands to Canary Wharf where we hopped on a Tube and went for some Starbucks & a few drinks in the pub.

Here’s a picture of the view from the Greenwich Observatory: 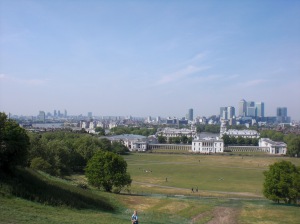 Day 5 was the first grey day: it rained when we set off for the Tate Gallery (with another necessary stop at the phone store). By the time we left the Tate the sun had decided to come back out and we walked back to our hotel via Pimlico, Buckingham Palace, Piccadilly and Soho. I bought another couple of CDs (Broken Bells EP, newest Fleet Foxes & latest Toro Y Moi!) at Sister Ray on Berwick Street and went on to our hotel. Grabbed another Starbucks and went back to the hotel at an early hour. My friend was to leave in the middle of the night to go to Italy, leaving me by myself to get some serious shopping done!

So my next post will be all about that!  For now here’s some more pictures from Greenwich & the Docklands! 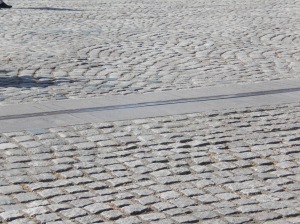 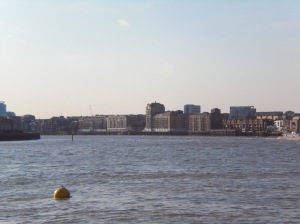