As you all know, I don’t have much time to read, which is why I love books that I can read in small installments. Hence, why I’m sharing this book with you. 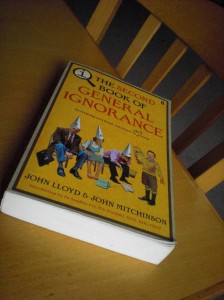 This is QI’s The second book of General Ignorance by John Lloyd & John Mitchinson. Subtitled: Everything you think you know is still wrong. It’s an incredibly funny book as well as easy to read. It ties in with BBC quiz show QI and this book reads like the show. The quiz is all about facts, many of them you think you know, but in fact depending on how you interpret the information, you are 99% of the time absolutely wrong.

– At what point does water freeze? Apparently it isn’t just 0 degrees Celsius.

– Where does a snake’s tail begin? Not right after its head.

– What country is the river Nile in? (Hint: it’s not Egypt)

And so on and so forth.

All the topics are interlaced and flow together in a very natural way, so you go from science, to animal kingdom, to writing, to history etc. Which actually makes sense and gives you the feel of some sort of story line. All the questions are answered in about a page and a half each, so it’s a quick read too.

What makes the book funny are two things. One, the authors have inserted quotes from the TV series wherever they can, so if you’re a QI fan you will most definitely get the references. Even if you’re not a QI fanatic you will be able to appreciate the book as well and find it funny. The book links snippets of seemingly unrelated info together. For instance, when talking about Caesar’s famous line Veni, Vidi, Vici they also start talking about a bird’s species of the same name. One part that had me seriously cracking up was the question: What language is the Spanish national anthem sung in? First of all the answer is that it isn’t as the Spanish national anthem has no words. They then talk about other national anthems, including the Dutch one of which the book says:

The Dutch seem to have no problem singing about being loyal subjects of Spain, despite not having been so for more than 350 years. Maybe the Spanish should sing the Dutch anthem instead?

The book is filled with snippets like these. So if you’re looking for an interesting read, that is lighthearted and fun too, then this book is for you. I still have about a third to go before I finish it, but I already know I will enjoy the rest of it.

Q: What have you been reading?